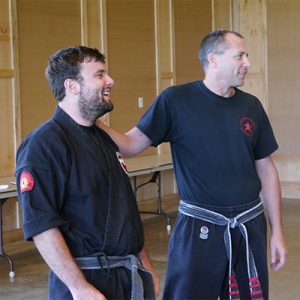 Sensei Kerkes began his martial arts career in Tae Kwon Do at the age of 10. The school eventually changed hands and became Martial Way Self-Defense Center. Dylan continued with Martial Way and began learning the martial art of Kempo-Jujistu. He received his black belt in 2009 and earned the rank of 4th Degree in 2018. Sensei Kerkes also holds a brown belt in Judo and a purple belt in Brazilian Jiu-Jitsu. In addition to his vast and accomplished martial arts knowledge and skill, Sensei Kerkes is an experienced strength and conditioning coach, is an excellent training partner and teacher, and brings a contagious enthusiasm and outstanding focus to all that he does.

Our Programs and Instructors

Martial Way is focused and determined to serve our students with the highest possible quality of instruction and service. Our students range from all ages and abilities with a variety of fitness goals. Learn more about Martial Way, our teaching staff and our programs. Want to try out a class before committing to lessons? Schedule a visit to our school and sign up for a trial session.

We value our connections with students and families. Please like us, follow us, and watch our videos.